I finally put the last stitch in the binding of my new tablerunner.  I made it last APRIL at a quilt retreat...nothing like a little procrastination.  The runner is from the book "Tablerunners A Second Helping" by Bear Paw Productions.  The original runner used half square triangles to make the geese effect.  But that wasn't going to work for me.  I didn't want a whole bunch of seems running through the runner so instead I just made regular geese instead.  For the fabrics I used Marcus Fabrics hand-dyes and a solid beige from my stash for the background.  I really love how it turned out and would love to make a similar quilt.

It would have been done last week but sometimes my hands are just too sore and achy from all the embroidery I do.  And doing binding really puts a strain on my right hand from having to grip the needle tighter.  C'est la vie.

I don't have anything to show in the way of what I'm working on right now.  I have start stitching the first block for the Halloween quilt so there's barely anything there to show and the new diamond quilt...I'm procrastinating.

So I decided to share some pictures of the pillows I made for my sofa last spring...I just now got around to photographing them today. 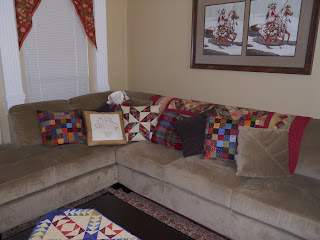 When we bought this sofa it came with only two pillows that were the same color as the sofa.  It was blah blah blah.  The first pillow I made was Old Glory, a design from who else but Crabapple Hill Studio (I like to do her embroidery if ya haven't noticed...wink). 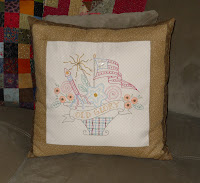 I bought a couple dark brown pillows and threw in two plaid chenille pillow but that wasn't enough.  I needed more color.  So...I made three more.  The first two were simple patchwork pillows from scraps found in my bins.  The third one was taken from a quilt called Maybelle's Stars, a kit I had seen in a shop.  I think the star is my favorite.  I want to make a quilt full of these stars one day. 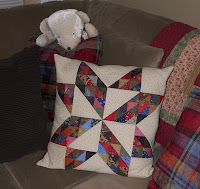 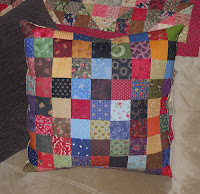 I guess I should get busy now and work on something.  Till next time...
Posted by Monica at 3:49 PM

Thanks for sharing your pillows....they are wonderful as well as your runner...

I love your runner Monica! :-) Beautiful! Our pillows matched the couch too~ I need to get sewing! ;-) Thanks for the inspiration!

Your tablerunner is very sweet. Love all the pillows on the sofa/couch however I'm quite smitten with the Old Glory pillow. :-)

The runner is stunning, Monica and I can see why you'd like to make a quilt using the same pattern.

Isn't it amazing what a little color will do? Your pillows were just that...a needed splash of color that made all the difference.

I love pillows...yours are beautiful.
Thank you for your comment.
Julia ♥