What's been going on?

Let's see...
I made my very first teddy, loosely following this tutorial. 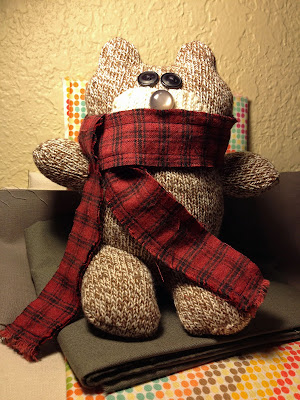 Following the tutorial, he was actually quite easy to make.
I think he turned out pretty good for a first effort.
After that I was feeling pretty brave so I decide to drag out my Stupid Sock Creatures
book and try making a monster.  I've had the book forever but hadn't felt
adventurous enough to try making one until now. 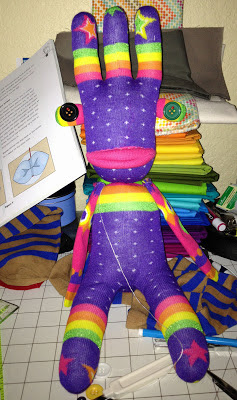 Since this photo was taken I've stuffed the arms, attached them and started to stitch the head on.
The mouth still needs some finessing but I think it's coming along rather nicely.
While sorting through my fabrics to do some destashing a week or
so ago, I got myself sidetracked.  And here is the result. 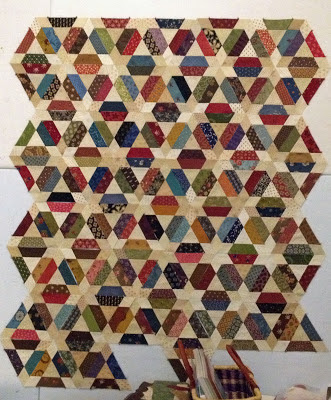 I've got 86 triangles made and am half done making another 80.  I've come up with
a couple setting ideas and now just need to decide on one.
I also made another clothesline rug last week.  Recently I was asked if I could make
three rugs for someone who wanted them for Christmas gifts. 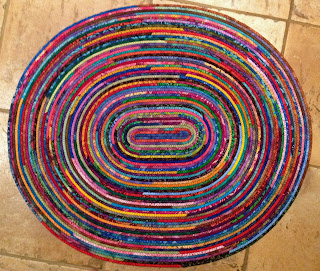 The rug was made using two 100 ft. packages of clothesline.  It measures 24" x 27 1/2".
It only took about eight hours to finish.  I would have already made the other two
rugs but I ran out of clothesline.  Fingers crossed, it'll be here Monday-ish.
And Tuesday evening I made this giant Cathedral Window pillow. 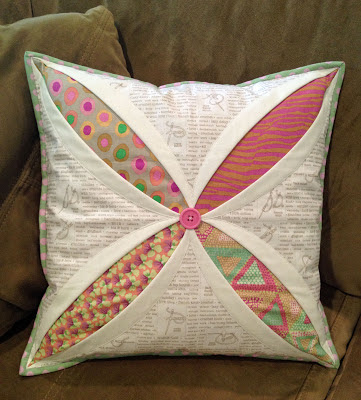 While at the Houston quilt show, I and my friends saw a pillow like this in a vendor's booth.
I think it was displayed just to show off Kaffe fabric because there didn't appear
to be a pattern for sale...not that I needed it.  Right then and there
I knew I was going to go home and make one.
And finally...on Monday I received not one but TWO pillow covers from Sarah (coincidentallyquilting) for Modern She Made Swap on Flickr. 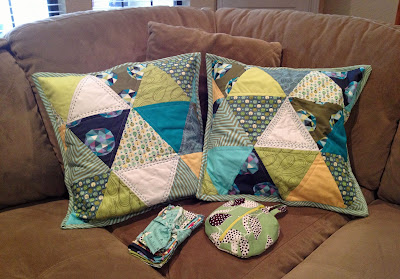 I am very pleased with the covers she made and I'm looking forward to participating
again.  If you think you might be interested in participating in this swap,
just click the link above.  The swap is open anyone.
Well that's all I have for today.  It's back to making triangle blocks for me.
Till next time...

Haha!! I *Love* the sock monster! And the teddy is so very sweet.

The sock monster is so cute even with unstuffed arms :)

I love the clothesline rug, are they very difficult to make? Love those Kaffes as well, and the text print you have used, looks really good as do your pillow covers from the swap, gorgeous colours and fabrics.

Looks like you've been keeping busy! I love your quilt top! And the sock bear is so cute. The sock monster is great! LOL I like the idea of clothesline rugs, but yikes! That is a lot of clothesline. Have a happy weekend!

Who would guess that you can make the cutest teddies using socks! Just darling! Loving your triangles... a kaleidoscope of color!

Lovely rug and I do like your sidetracked quilt. What is the name of the pattern?

Wow, those triangles are wonderful! What a nice way to get sidetracked.

The 'thrown together' quilt is simply astounding. In my wildest dreams! And the rug--I have made hot-pads like this and know the amount of time it takes. Again, gorgeous.