...and here's the proof...sorta.  Little Austin doesn't look like he's bursting with excitement over his new quilt but I have it on good authority that both he and his mom love the quilt. 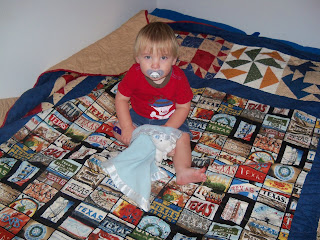 I never did get a picture of the completed quilt before it was handed off to my husband's coworker but Austin's grandpa was kind enough to send me this pic of him with his new quilt.

The story behind this quilt is when Austin's grandpa was a small boy his grandmother made him a large bedsize quilt.  He still has that quilt today along with many fond memories of his grandmother.  And he wanted to share that same experience with his grandson.

That's where I came in.  Grandpa enlisted me to make a larger bedsize quilt that Austin could grow up with and use throughout his life.  The only requirement was  that it be Texas-ish (yes...Texas-ish is now officially a word).  Since Grandpa was from Texas and little Austin lived in another state, Grandpa wanted Austin to always have Texas with him.  Well I think that was accomplished.  DH even quilted it with a state of Texas pantograph.

Long story short...everyone loves the quilt and Grandpa can continue building memories with his grandson.

The quilt turned out great and I'm sure he will love it. Too bad you didn't get a complete picture of the quilt though. I remember seeing it on your design wall and thought it was wonderful. Great story. Have a great week and thanks for sharing.