I know I've been absent for almost a month but it's been for a good reason.  I've been finishing up entries for our local quilt show which occurred this past weekend.
Anyone who knows me personally, knows I hate entering quilt shows.  It's just never really been my thing.  I know my work isn't perfect.  I know what I could've been done better with each piece.  And I cringe at the thought of a judge critiquing my work and pointing out the flaws and why I didn't win.
With that said...since moving to Florida I've made some friends that encouraged me to enter.  Sometimes they even had to give me a kick to keep going and finish.  And I'm glad they did because it pushed me to want to do my best work.  I'm still not going to win any awards in Houston or Paducah but I'm pleased with the results.
First, as a group we entered the Group Challenge and took third place.  For our challenge we each created a quilt using Tula Pink's City Sampler book.  Which blocks, how many, and the layout was up to each person.  As a group, I think we did pretty good.  They all looked good next to one another and had cohesion.
Here are the pics of our group entry.  Thank you Joey for letting me steal photos from your Facebook page. 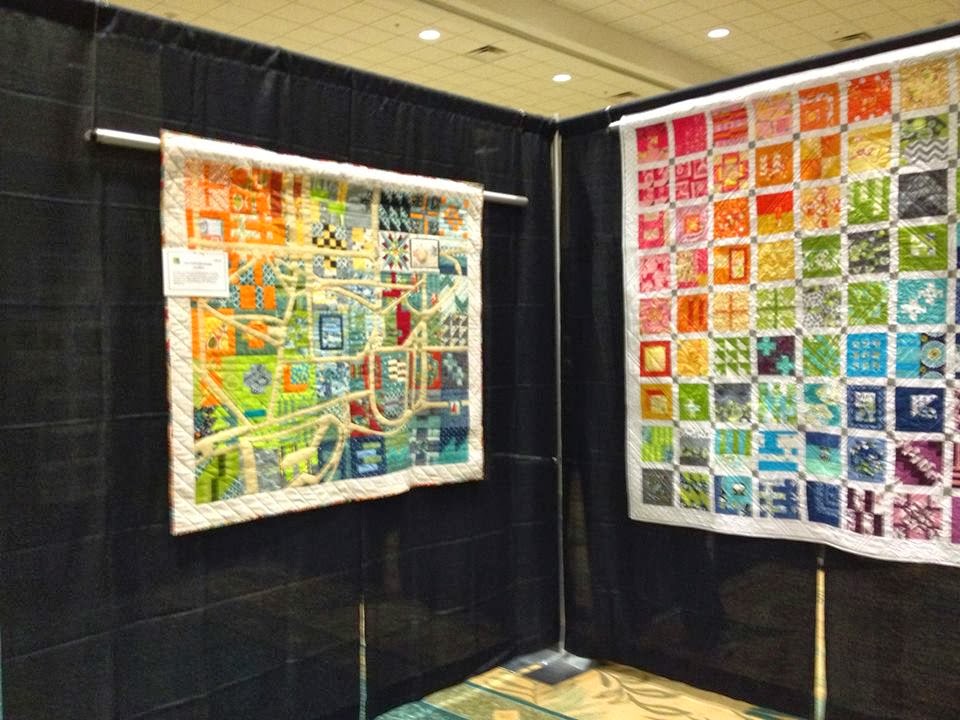 On the left is Joey's map of Barcelona using Zen Chic's Barcelona fat quarter bundle.  She even added in a Mariner's Star and map legend.  It was very cool...and very outside the box.
On the right is Margy's quilt.  She used Kate Spain's Simply Color bundle along with other pieces from her stash.  Margy was the only one of us that made all 100 blocks. 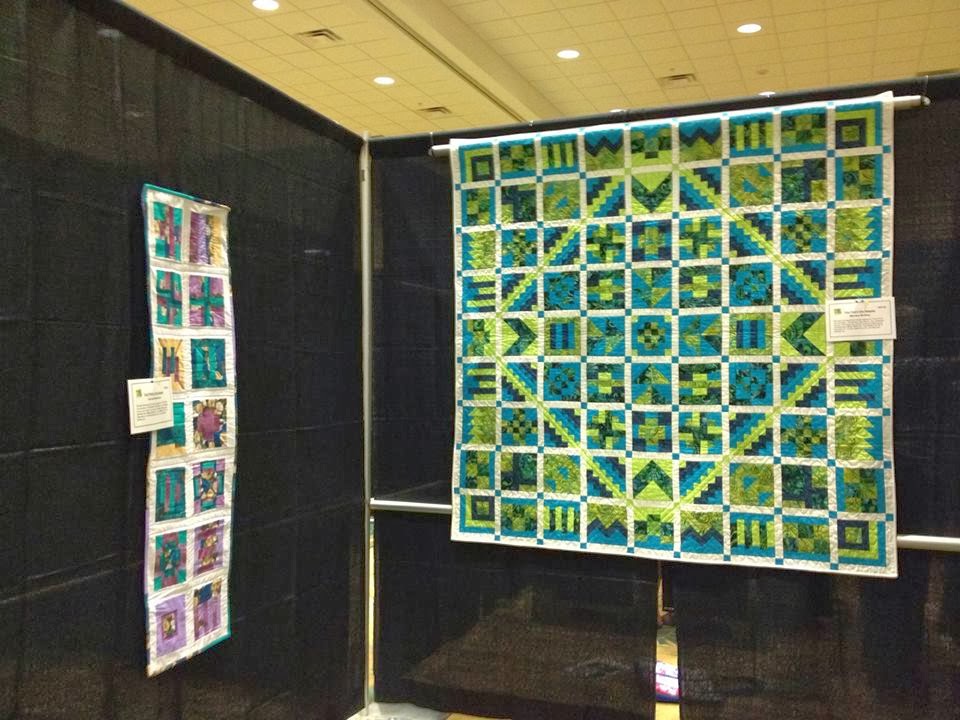 On the left is Donna's bed runner.  She used a small sampling of Tula's blocks and used Asian prints.
On the right is Maureen's using tone on tone prints.  Never in a million years would I have thought to use Tula's blocks in the way she did.  It was a pretty awesome idea...and very effective! 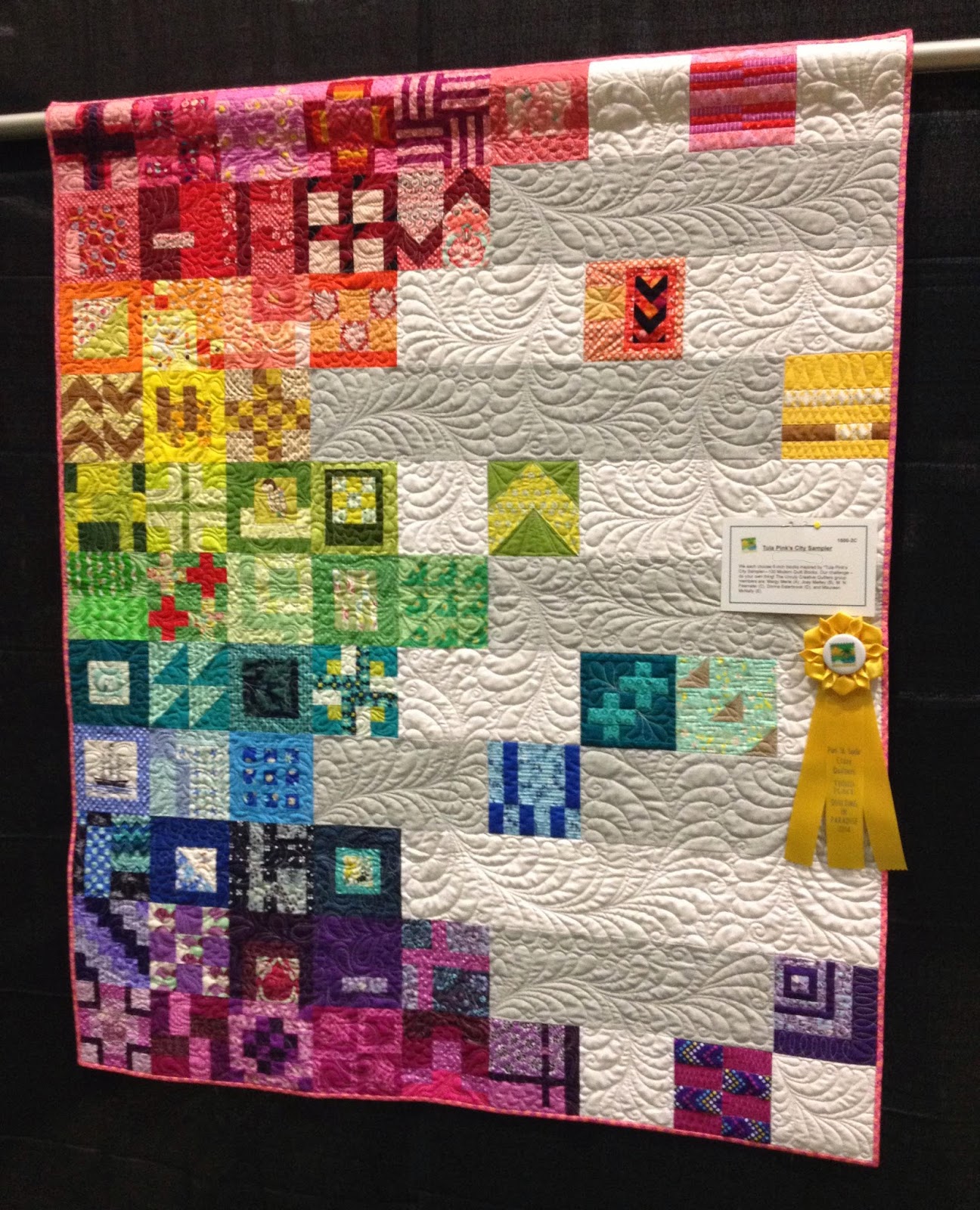 And here is mine...feathers and all.   I call it "Dear Tula."  It may look familiar to you because I created a smaller version with leftover blocks in December to practice my feathers before quilting this one.
The judge's comments were that my quilt had "excellent asymmetrical balance" and the "change in scale works well."  She also said that I need to "strive for more consistent stitch length"  which I was painfully aware of before entering it.  Sometimes I move faster than my machine can quilt.
My second entry was "The Butterfly."  Back in January it received a Best Machine Applique award from the board members of the guild that hosted the challenge and it hung at the Mancuso World Quilt Show in West Palm Beach. 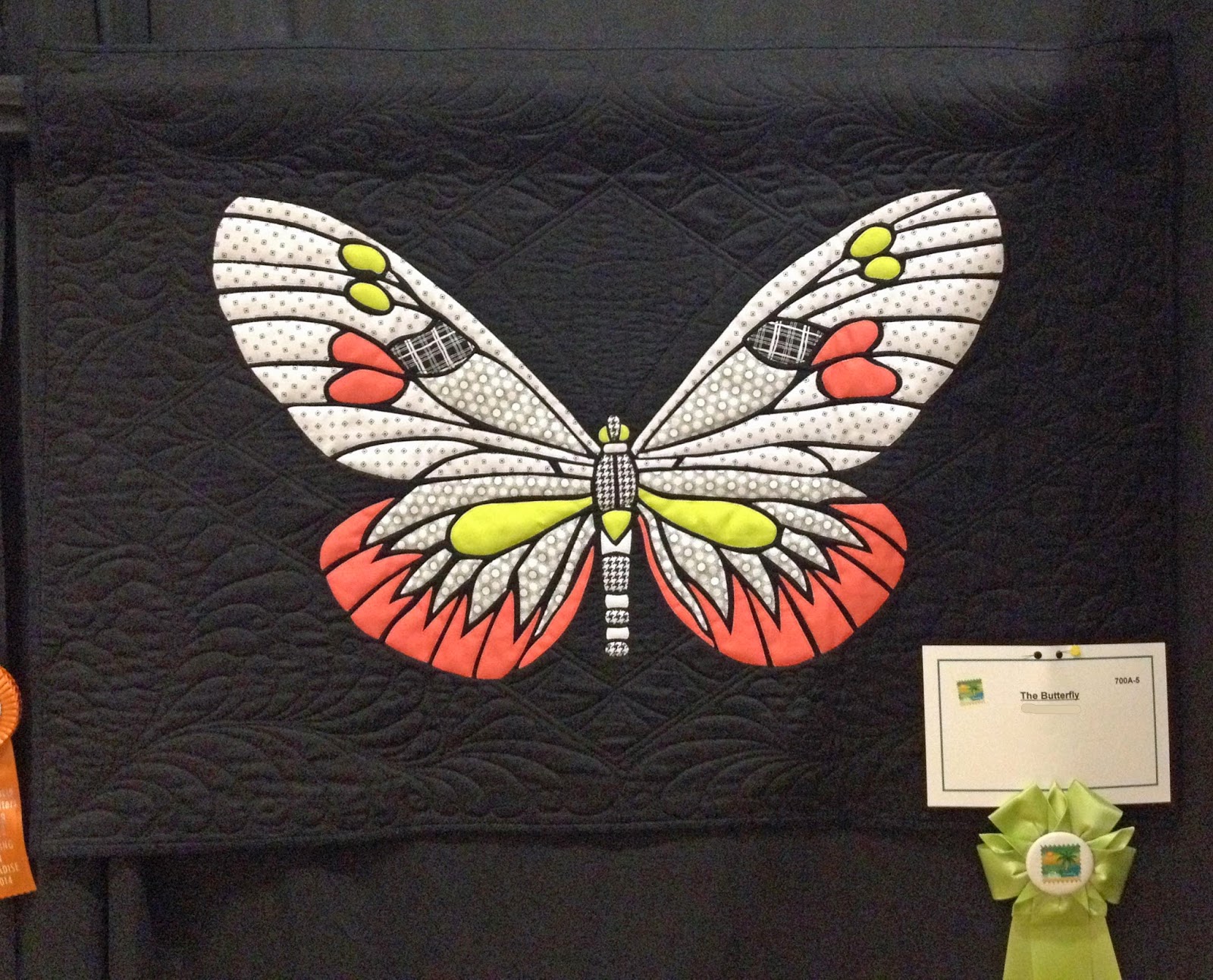 At this show, it received second place in the Small Machine Applique category.  The judge's comments were that it had "high contrast fabrics for striking design" and an "additional border treatment may have added to this design."  I totally agree about the additional border...if I were ever to do another black quilt for a show.  It just doesn't show well against a black curtain...a definite lesson learned.
She also noted bearding on the quilt and that I needed to use black batting...which I did.  It just goes to show judges aren't always right and they make mistakes sometimes too.
And lastly, my third and final entry was for the Member Challenge.  I call it "Tropical Beauty". 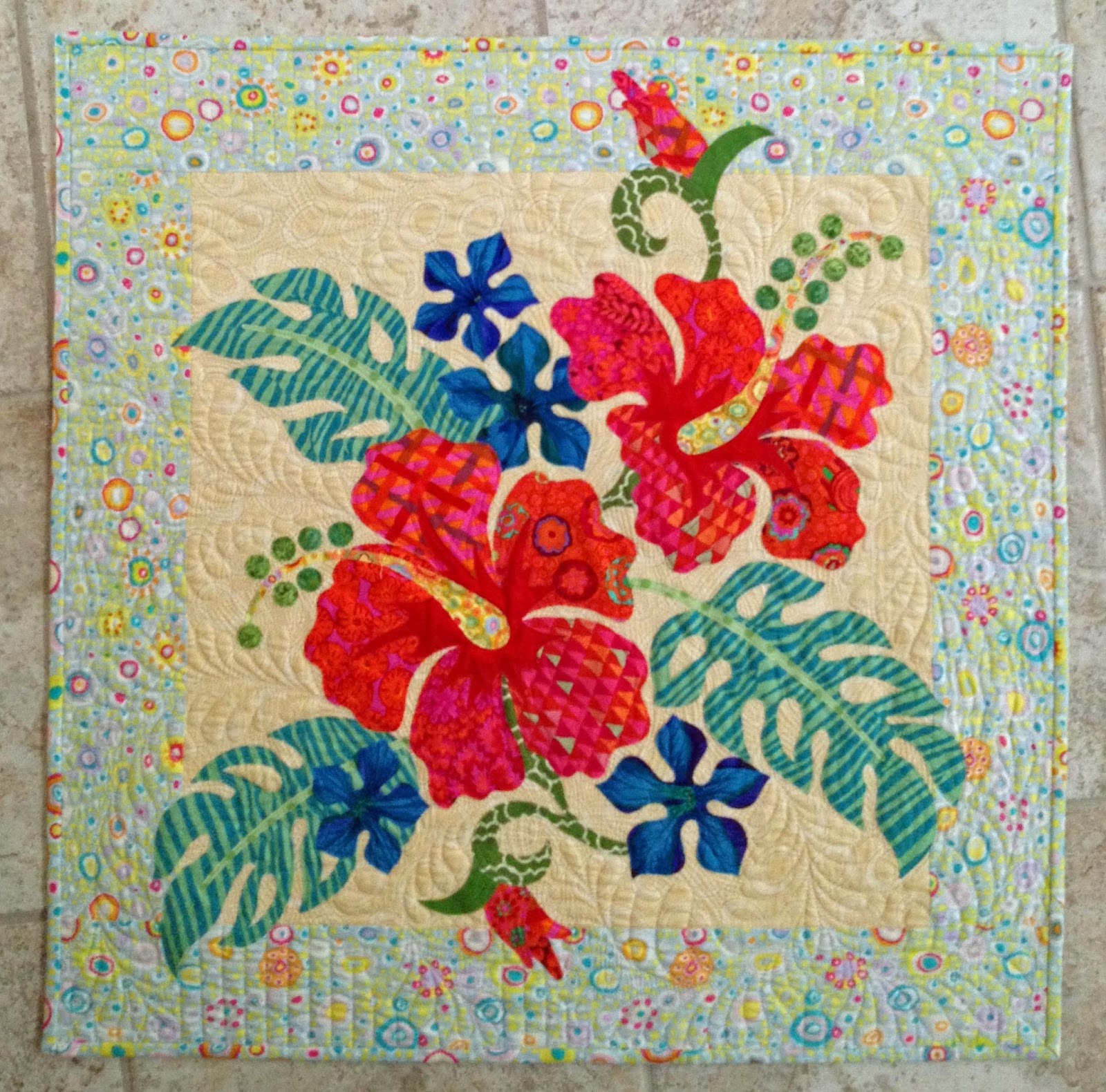 Here is a picture of it after it was blocked and bound.  Sorry the photo is not better.  It's hard to see all the feathers in the quilting which is what I'm especially proud of.  The challenge winners were decided by ballot as a Viewer's Choice.  And I'm happy to say it took second place.
The challenge theme was "Quilting in Paradise."  We were to create a quilt no larger than 24" square with some type of foliage and we had to use the green fabric on the left in the first photo below.
Here's a look at all the entries as they hung at the show.  I was really impressed by all the entries. 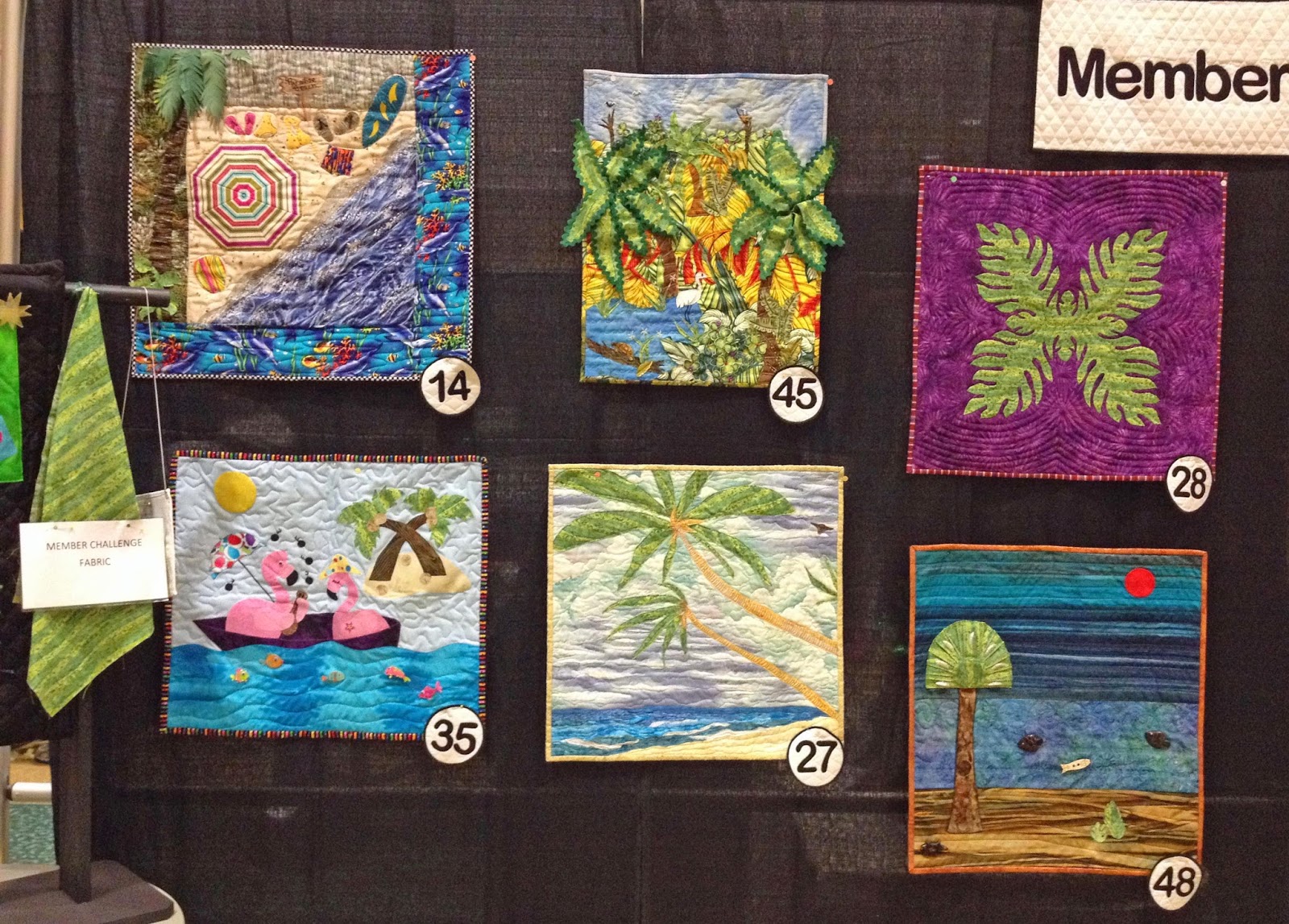 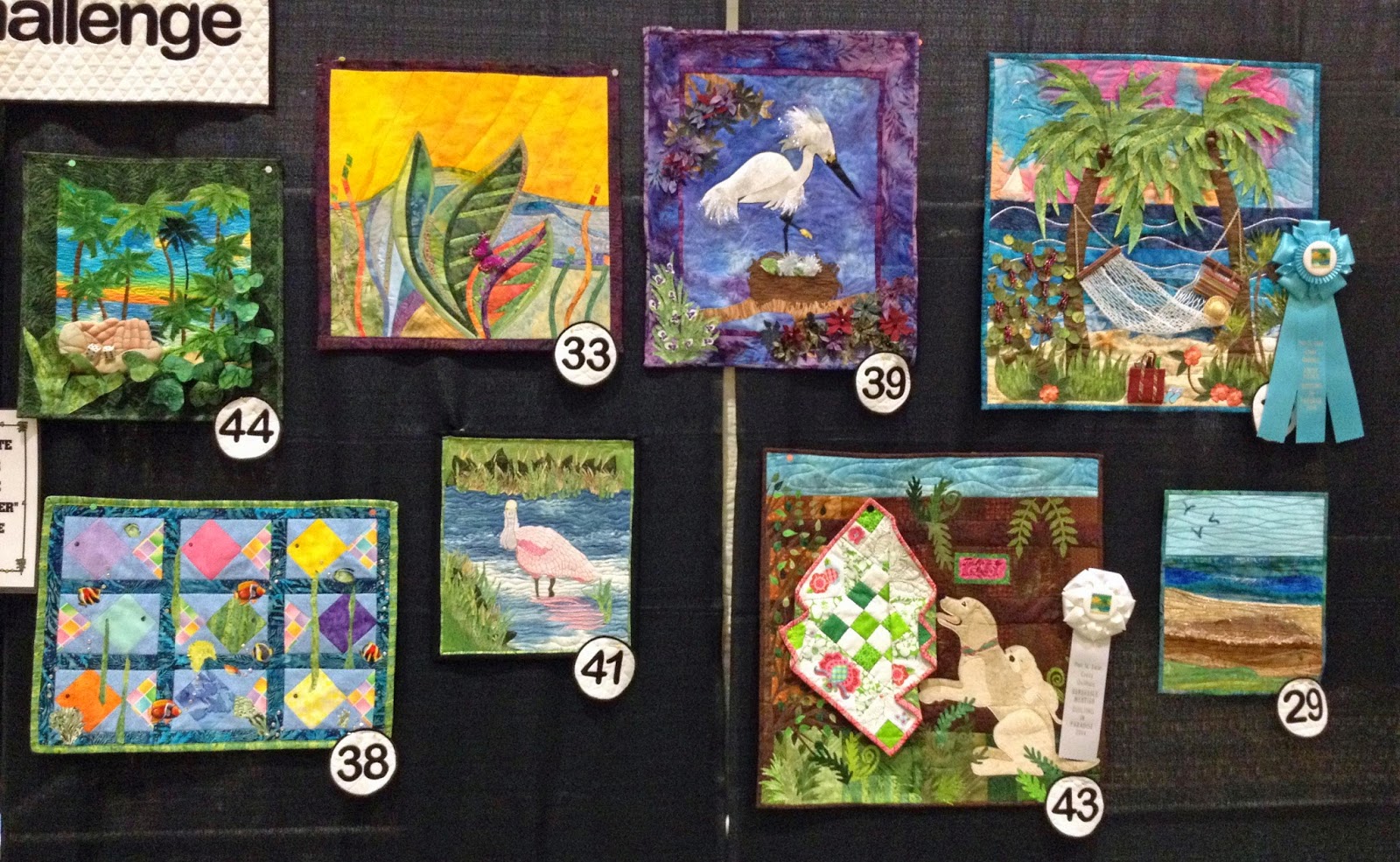 In this photo you can see the 1st (turquoise) and Honorable Mention (white) winners. 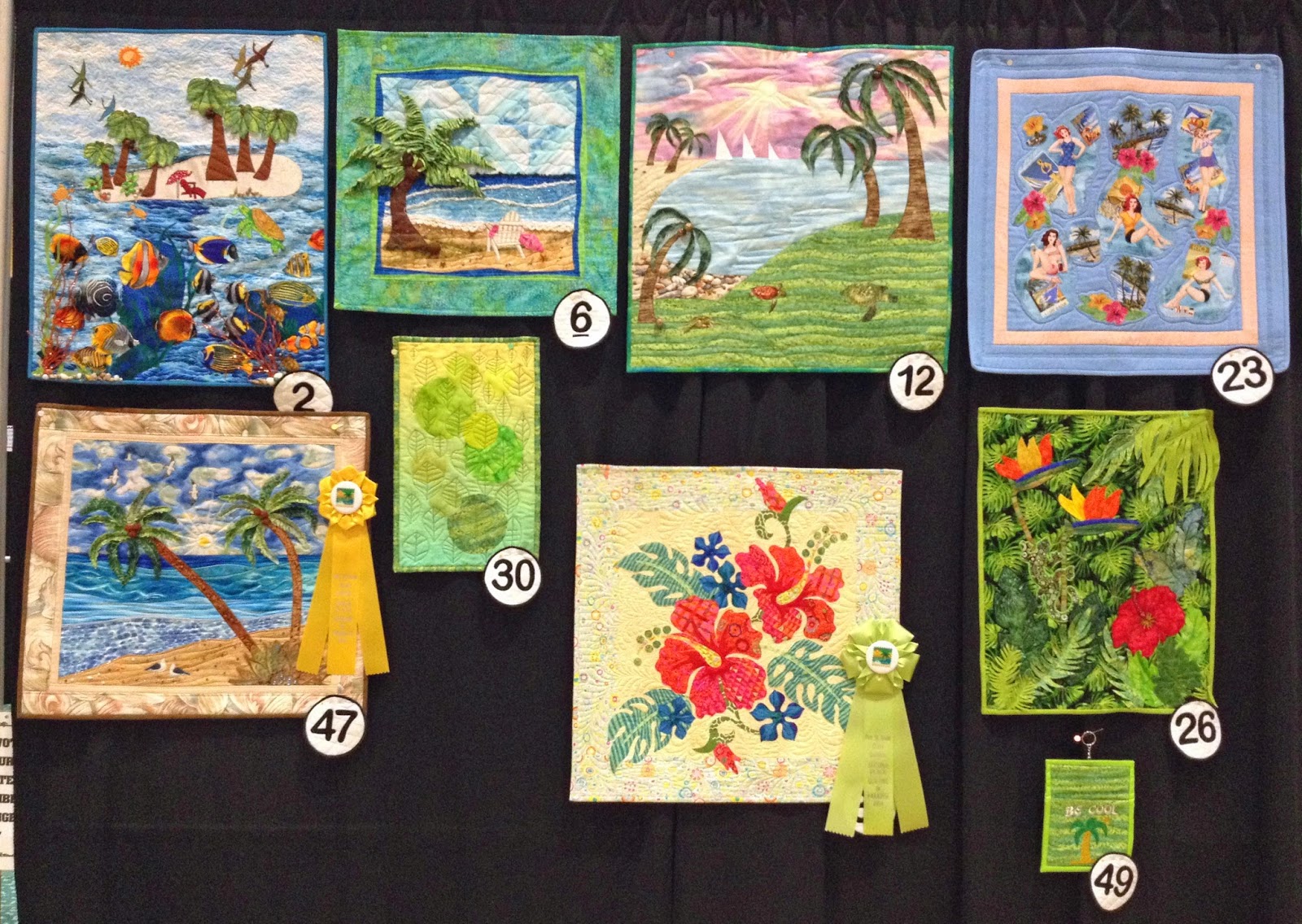 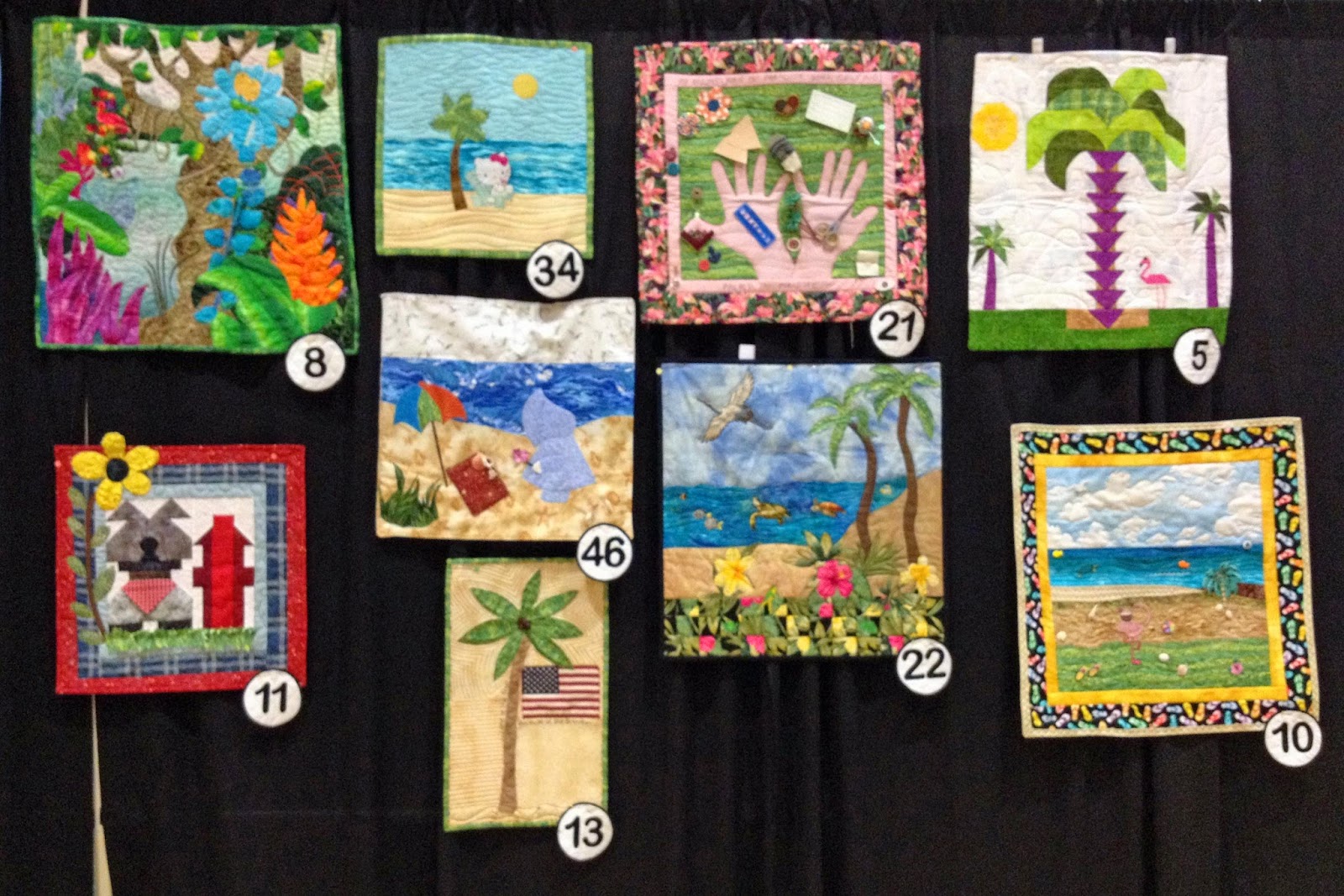 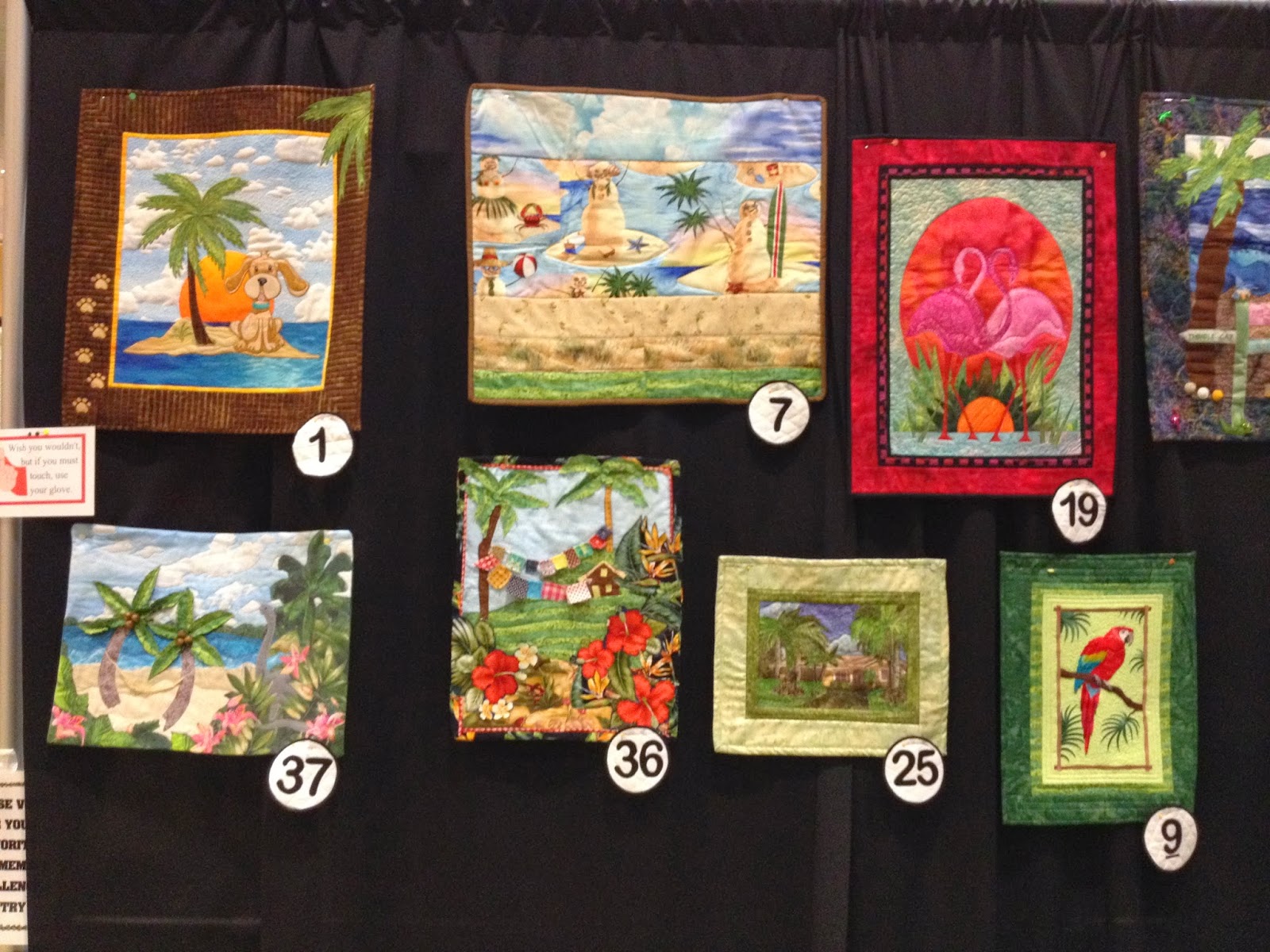 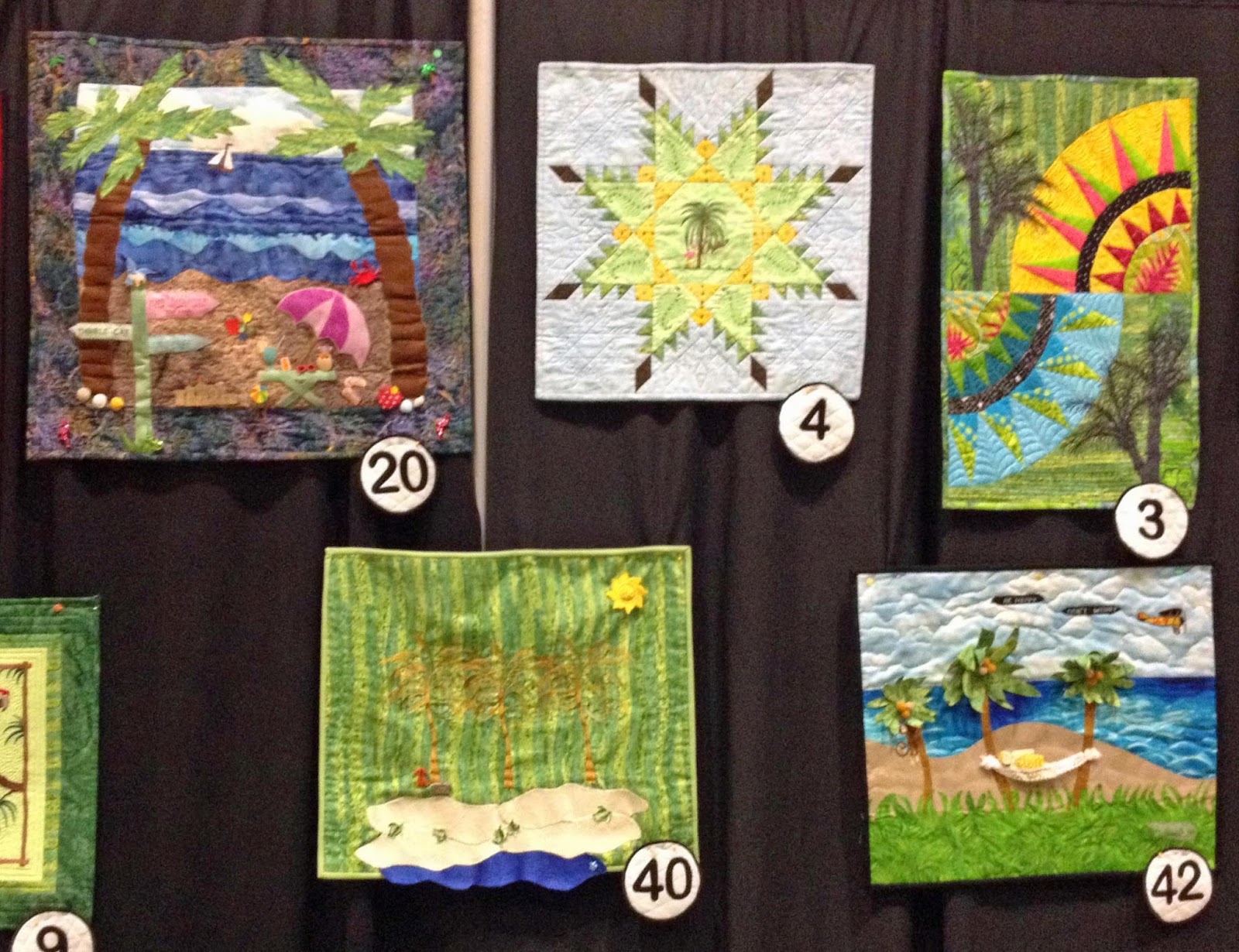 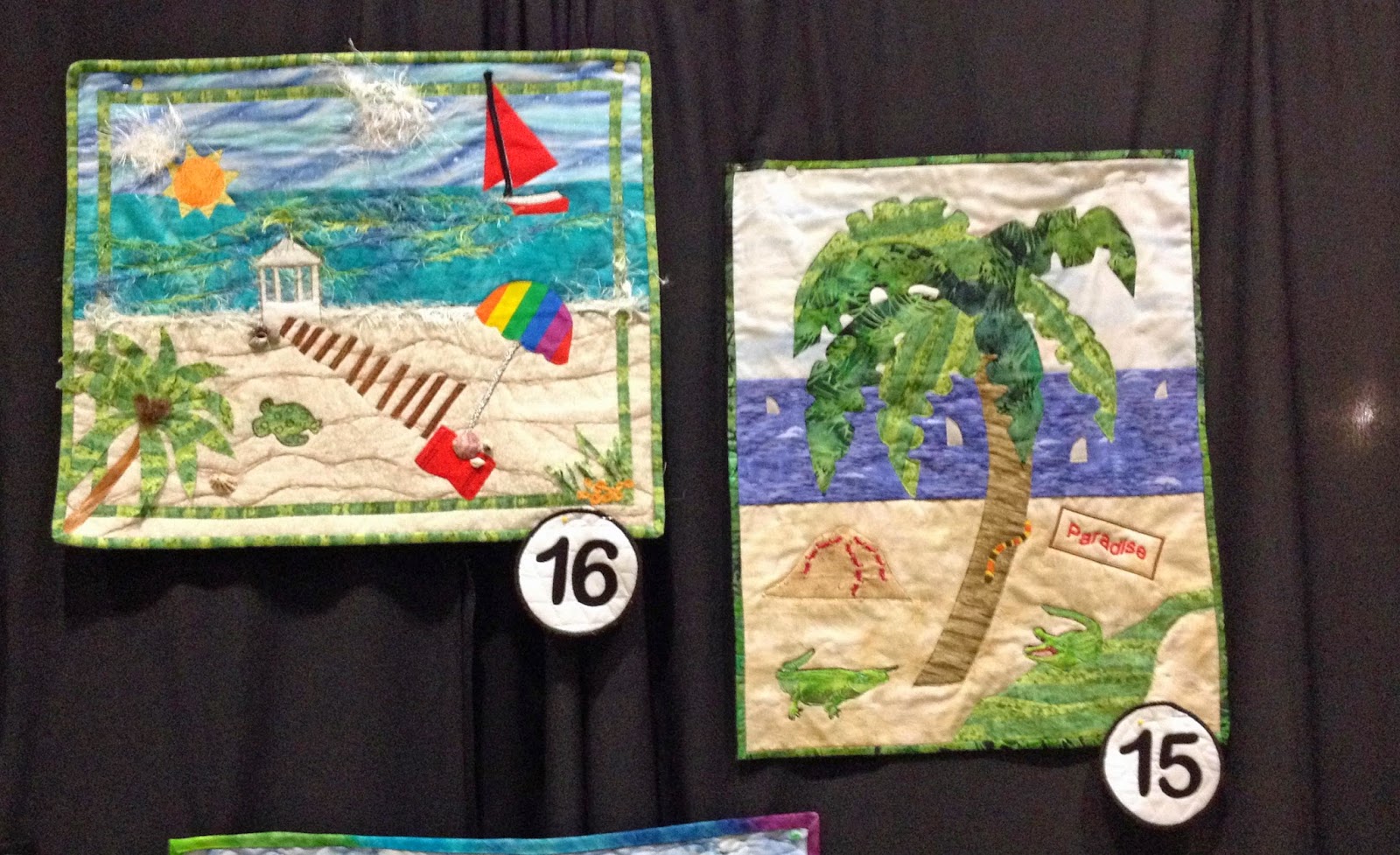 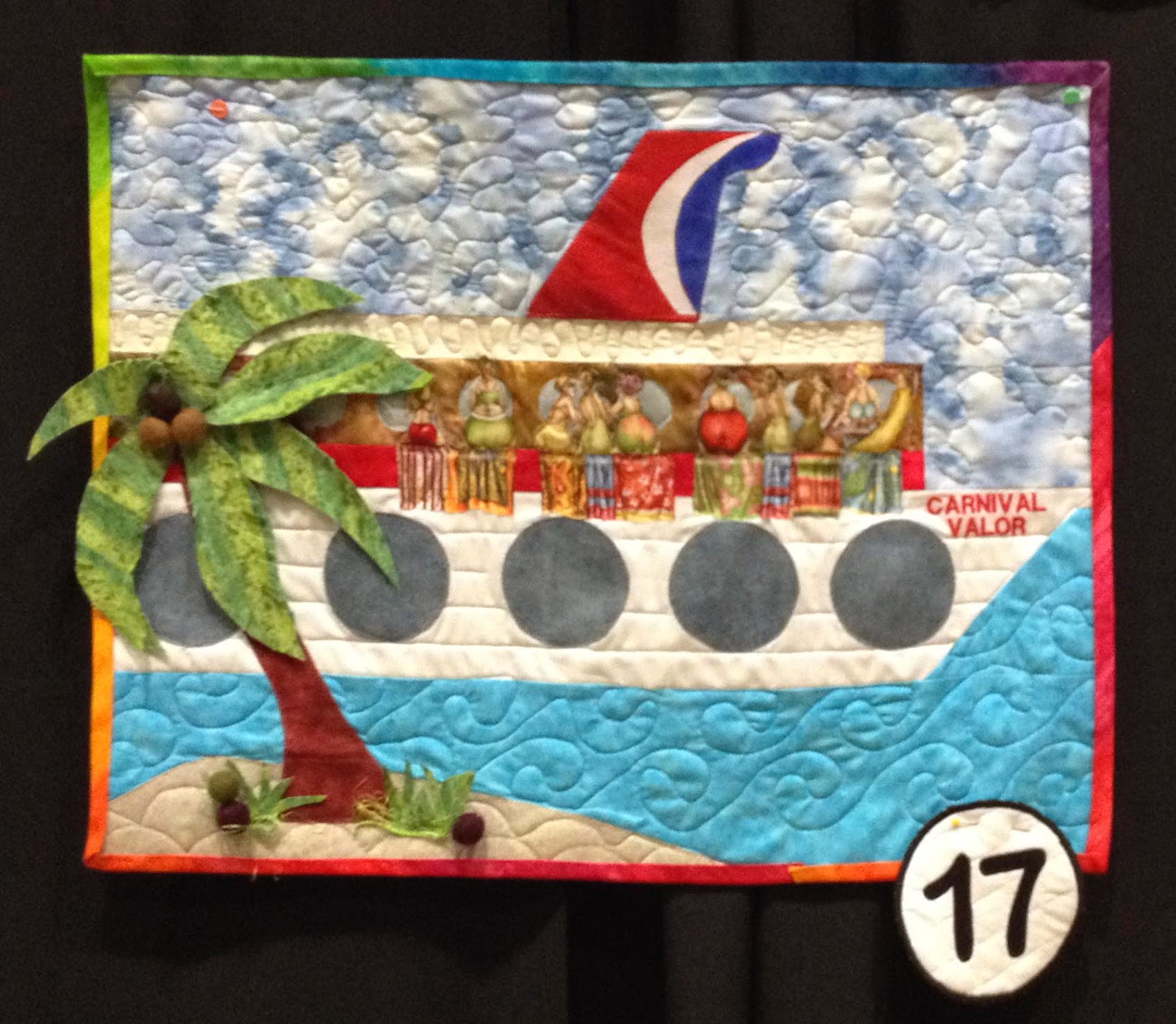 Well I'm off and running.  I have a couple of quilts to longarm.
Till next time...hope y'all have a great rest of your week!
Posted by Monica at 12:45 PM

Welcome back! I was missing you. :-) Congrat's on your ribbons~ your entries are definite winners! You certainly have a very talented group~ the Tropical quilts are really fantastic! Have a happy day!

Dopn't sell yourself short! Your quilts are amazing and truly beautiful! You did an awesome job! Congratulations

Congratulations. Your work is lovely.

That was a very successful quilt show for you. Congratulations on your well-deserved ribbons. I'm getting a kick out of the quilt judge's oops moment with the bearding/batting issue :)

Congratulations on your well deserved winning quilts!! Also congrats on entering the show. I think a lot of quilters underestimate their own talent and are hesitant about entering shows. So happy you did and were rewarded too!

Welcome.Your quilts are fabulous and thanks for the pic!

Congratulations, Monica. Your work is wonderful! (You are a very talented bunch up there!) I won't be surprised if I see one of your quilts in Houston in the future - don't sell yourself short! :)

Wow! You amaze me! Good for you for going for it. I'm planning to enter two quilts in our guild quilt show this year. I didn't make one of them - it'll be a group entry - a 89 year old lady made me a king DWR two years ago in about 3 weeks. Yes, three weeks and that was with my going there to answer questions (60 mi trip each way). Anyhow, I paid a professional to quilt it and I'm just now binding it 2 years later. It is beautiful. So, I want to honor the lady who made it - she's still alive. And, a couple of years ago, I made a quilt for my SIL when she was ordained as a pastor (after she retired from her first job). I purchased a large amount of fabric and ended up making a queen mate for me. I couldn't decide if I wanted to scallop the edges on mine, too. I have decided to scallop them and enter it in the show. It certainly won't win anything but it'll be a stretch for me. One lady told me that she had a comment about her applique from the judge and there was no applique on her quilt - lol Yep, they make mistakes. Also, most of it is subjective. I mean if seams don't meet, they don't meet but borders, choice of fabric. I was criticized in cross stitch for frame choice. I chose the frame to go with my MIL's furniture. I was so hurt I've never entered another x-stitch contest. No negative comments were made about my work!!!! I'm a lot older and I just want to honor the lady who made the quilt. As to another border on your quilt. What if you put a white border on it and the background behind the quilts was white - what would the judge say then???? lol Great job!!!!

I so enjoyed your post this afternoon. Thanks for sharing the judges comments too because it helps us all learn. And you're right about the judges not always being accurate. I got a comment saying that I could improve on my curved piecing of a very large circle. Well, the circle was appliqued so I took it as a compliment that the judge thought my uniform stitching was made by machine - ha! The Tropical Beauty is lovely.

Congratulations it is beautiful... Thanks for sharing all the pictures loved it

WOW, you have a bunch of talented quilters in your group including you!!! There were a lot of those challenge quilts that probably should have gotten ribbons if more could've been given!! Congrats on all of yours. Your quilting is beautiful.